Morgan Stanley volunteers pick cabbage in Pittstown for the needy 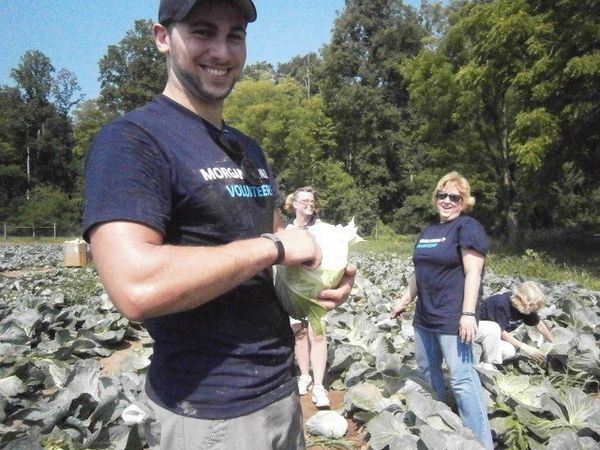 UNION TWP. – Around 70 people who usually work in offices sweated in the sun today, volunteering as farm laborers to pick produce that will be given to the needy.

Employees from Morgan Stanley, the financial services firm, showed up at the America’s Grow-a-Row farm to pick cabbage. They expected to harvest around 25,000 pounds of the vegetable by the time they were done around noon.

The group planned to also pick sweet corn, but there was so much cabbage to handle that the corn work was left for another group to do Friday, said Heather Mulvey of the Grow-a-Row staff.

The produce was placed in huge cardboard boxes on pallets in the fields, then carried by a tractor with a fork-lift loader out to the barn. There it was loaded onto a tractor-trailer from Community Food Bank of New Jersey in Hillside for distribution to food pantries.

Community Food Bank has a Kids Cafe program in Newark, and the event here kicked off a series of supporting nutrition education programming that will serve at least 500 poor children. It’s aimed at tackling health, wellness and nutrition issues faced by city youth.

Newark is one of three cities nationwide participating in the Morgan Stanley Healthy Cities initiative. America’s Grow-a-Row is based at Peaceful Valley Orchards on Route 513. The organization was founded by Chip Paillex, who now serves as its president.

Last September, the group celebrated its 2-millionth pound of food donated to the needy.

To date more than 2.7 million pounds worth of produce has been given. It started back in 2002 when Paillex saw a plea from the Flemington Area Food Pantry for gardeners to give it excess produce. The first year, 120 pounds were donated.

Later Paillex expanded the program into a mission project of the Bethlehem Presbyterian Church in Pittstown, and it has grown ever since.