Grow A Row – Is This a Window into the Future of Food?

The non-profit  “America’s Grow a Row” was started by a non-farmer – Chip Paillex – some 14 years ago in New Jersey. Back in 2002, Chip and his daughter rented a small 30’ X 30’ plot and started planting food crops for the first time in his life. One day they saw a three-line article in the paper that said if you ever have extra produce, “grow-a-row” for the hungry and bring it down to the food pantry.

Moved by the simplicity of the message Paillex and his daughter began on a mission to give fresh fruits and vegetables to folks in need. That first year, they donated 120 lbs. of produce to the local pantry.

As time went on, Paillex became a master at getting other people involved. By 2008, the private garden was converted into a fully operational farming non-profit program. Today some 4,000 folks volunteer to help on a 138 acre farm and a 150 acre orchard. The following info graphic #1 illustrates the growth in the volume of fresh fruits and produce that Grow-A-Row has donated. 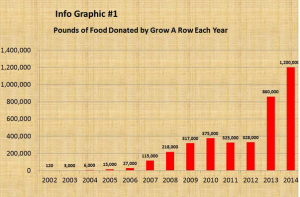 Grow A Row established a relationship with the Community Food Bank of New Jersey, which uses its trucks to help distribute most of the produce. In 2014, Grow-A-Row reached the new milestones in its service to include:

While Grow A Row may not rival the large farms, processors and grocers in the industrial food chain, non-profit farming is steadily growing. We have covered a number of stories in our news pieces of non-profit farming ventures with more to come. Non-profit farming captures the imagination and the hearts of Americans and has no limits to its growth. When one factors in:

The nation may already be – on a net basis – engaged in non-profit farming. To what extend might the Grow A Row food model be a window into the future of food?