Chip Paillex, president and founder of AGAR, honoring Bonnie Duncan, CEO of the United Way of Hunterdon County for her extensive work serving the local community.

America’s Grow-a-Row 3rd annual Farm to Fork Dinner on May 2 at Life Camp in Pottersville, was a huge success and raised more than $60,000. 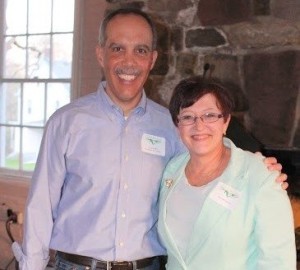 Proceeds benefit America’s Grow-a-Row (AGAR), a nonprofit organization that grows and gleans fresh, healthy fruits and vegetables that are donated to those suffering from hunger and those living in “food deserts,” or areas that lack access to fresh, affordable produce, throughout the state of New Jersey. AGAR thanks the following corporate sponsors who committed their support to the event: Greenman-Pedersen, Inc., ExxonMobil, PSE&G, IH Engineers, ShopRite of Hunterdon County, Brickman Landscaping, and Stop & Shop. 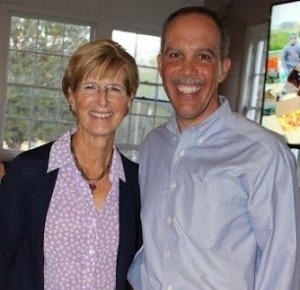 Proceeds will help AGAR reach their 2015 goals of donating more than 1 million pounds of farm-fresh food to various hunger relief agencies in New Jersey while at the same time educating people of all ages about hunger, the importance of agriculture, and healthy eating. AGAR, supported by nearly 4,000 volunteers who harvest produce throughout the growing season, hosts 750 young people from low-income urban areas at their farm through the Growing Healthy Kids Farm Day, provides Free Farm Markets in Newark, Camden, Morristown, and Jersey City and hosts Recipient Volunteering events for the recipients of the produce so that they can harvest fresh food for their own communities and others in need. This opportunity to participate in a volunteer capacity enables those served to give back to the program in a fulfilling and meaningful way. In 2014, AGAR’s President and Founder, Chip Paillex, was honored with the recognition of CNN Hero and Ford Motor Company Go Further Everyday Hero.

At the event, AGAR announced their capital campaign to purchase the 150-acre farm where the organization is headquartered in Pittstown. The farm is owned by a third party who has signed a two-year lease for purchase agreement with AGAR. AGAR recently received matching grant funds in the amount of $1.25 million to assist in the securing of the farm and supporting the ongoing operations and is diligently seeking a combination of funding and financing to fulfill the requirements of the matching grant opportunity.